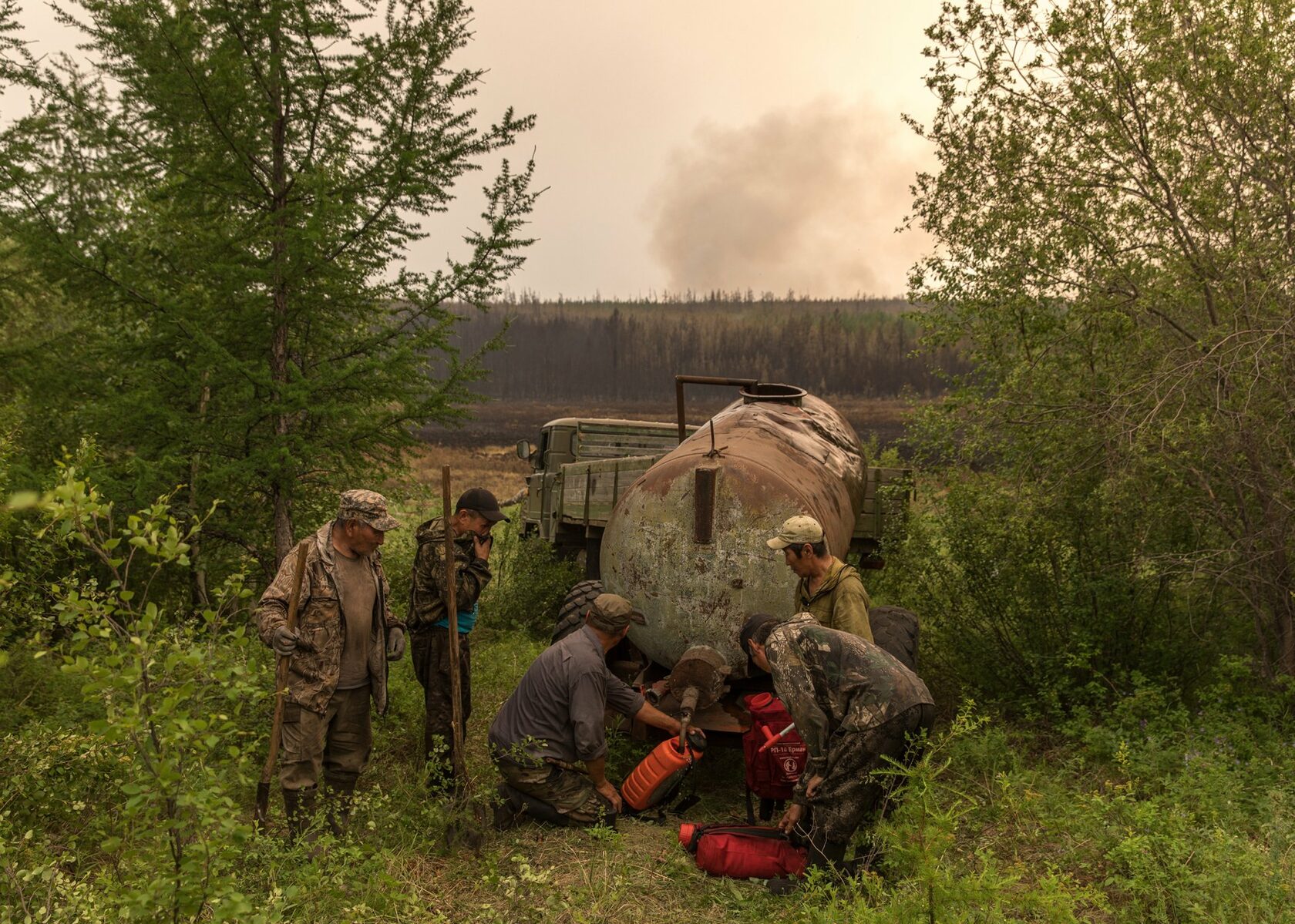 Villagers in Siberia, Facing Wildfires and a Warming Climate, Battle to Protect their Homes

This summer, as a haze of wildfire smoke descended on the village of Magaras in the East Siberian region of Yakutia, crews of local residents set out into the taiga forest to defend their land from the encroaching flames. There was little in the way of protective clothing to go around, and no radios or GPS transponders, let alone firefighting aircraft to stop the blazes around this settlement of around 1,000 people. Locals made do with shovels, axes, and small fire-fighting pumps that they carried on their backs, along with their tractors, some dating back to the Soviet era, which they used to cut ditches into the vegetation in an attempt to hold back the fires. There was little choice but to undertake this dangerous work themselves, the local volunteers said. If they stood by and waited for government help to arrive, it would be too late.

A hot, dry summer has fueled massive blazes in this East Siberian region over past weeks, burning through more than 10 million acres of Yakutia, also known as the Republic of Sakha, and sending clouds of smoke drifting all the way to the north pole. The fires have released more than 500 megatonnes of carbon dioxide equivalent in the atmosphere, the highest such total ever recorded for the region, according to the E.U.’s atmospheric monitoring service. This month, authorities evacuated two villages in the region as encroaching fires endangered residents.

Local firefighting volunteers sleep in a small hut near the village of Magaras in the Gorny District of Russia. Alexey Vasilyev

Alexander Yakovlev, 40, a volunteer from the village of Kyuerelyakh, together with his 18-year-old son Markel, has been working to extinguish wildfires near his home since early in the summer. Alexey Vasilyev

Earlier this summer, photographer Alexey Vasilyev, a member of the Yakut ethnic group that comprises a large part of Yakutia’s population, set out to document efforts by firefighters and locals to battle those blazes. The experience, Vasilyev says, was deeply troubling. “I watched the forests smolder as the fire slowly consumed the trees, the grass. I watched as life slowly melted away in these places,” Vasilyev wrote over email. “I wasn’t scared, I was just sad to see nature die. I thought of the Yakut spirit of the forest, Bayanai. I wondered what had made him so angry that he had sent so many fires on people.”

Yakutia leaders have blamed global warming for the hot, dry conditions that seeded these blazes, with arctic temperatures warming faster than anywhere else on the planet, according to climate scientists. During an extraordinary heat wave last summer, the Siberian town of Verkhoyansk above the Arctic Circle set a temperature record of 100.4℉—climate scientists later determined that such extreme heat would have been essentially impossible without the effects of human-made climate change. Temperatures this summer have been unusually hot and dry as well, with firefighters battling blazes in 95°F heat (the region’s average summertime temperature is around 68°F).

Firefighters of the Ministry of Emergency Situations of the Russian Federation resting after putting out small fires near the village of Dikimdya, on July 15. Alexey Vasilyev

A firefighter extinguishes a grassroots fire near Kyuerelyakh. Alexey Vasilyev

Russian authorities have dispatched help, mobilizing jets and military helicopters, along with more than 2,000 firefighters. But critics have called out the government for a 2007 decision that cut Russia’s airborne forest protection service staff and transferred management of the country’s vast timberlands over to businesses and local authorities, which critics say has spread corruption and hurt early detection and rapid containment efforts.

Much of the effort to fight the blazes has come from local villagers, who have taken the work of defending surrounding hay fields—essential for their livelihoods raising horses and cattle—into their own hands. Community ties are tight here, and many people try to pitch in any way they can. One local blacksmith, Alexander Yakovlev, 40, who went out to fight the blazes with his 18-year-old son, says he doesn’t expect to get compensated much for his efforts, but he decided to put his work on hold anyway to help battle the fires.

Volunteers fill firefighting satchels with water, at a source near Magaras. Alexey Vasilyev

In the nearby town of Kyuerelyakh, about 150 local volunteers and government firefighters were working to contain four large fires around the village when Vasilyev visited last month. The smoke was terrible, Vasilyev says, and it was difficult to breathe. He asked one of the professional firefighters if they ever got used to such conditions. The answer: never. On local social media, videos have been circulating of Siberian children saluting such firefighters like soldiers.

One older Kyuerelyakh couple, Kirill Kirillovich and Tatyana Nikolaevna, say they’ve never seen fires come so close to their village. It’s been a difficult stretch for the two; both caught COVID-19 last year, and they emerged from a long and difficult recovery to find themselves under siege by wildfires. Now Kirillovich has joined volunteer efforts to extinguish the blazes, despite the choking smoke, while Nikolaevna helps bring water and prepare food for the volunteers. “It’s very scary and unsettling,” says Nikolaevna. “You can just feel how badly this coronavirus has affected [our] lungs, plus this smoke. It’s impossible to breathe.”

An employee of yhe Aerial Forest Protection Service of the Russian Federation puts a wet handkerchief on his head—an effective DIY protective against the dangers of wildfire smoke. Alexey Vasilyev

At a morning briefing in the village of Kyuerelyakh., firefighters from the Russian Ministry of Emergency Situations discuss a plan of action to extinguish nearby fires. Alexey Vasilyev

A forest fire along the Viluy highway between Yakutsk, the capital of Yakutia, and Berdigestyakh on July 16. Alexey Vasilyev

In an isolated region beset by climate disaster, locals have mixed feelings about journalists who document their plight. Some wish reporters would leave well enough alone and quit asking questions they’ve answered before. Magaras mayor Vladimir Tekeyanov says he doesn’t care which journalists visit him, Russian or foreign, pro-Putin or opposition, so long as they help tell people about what’s happening in his region. And in the remote, seemingly endless wilderness of the taiga, some people simply want visitors to relay a message to the outside world. One professional firefighter who had been working in the wilderness for two weeks with no cell phone or internet connection asked a visiting journalist to send a video message to his wife telling her he was alright, and that he missed her.

The mayor of Magaras, Vladimir Tekeyanov, in his office. Alexey Vasilyev

For those who call this region home, the destruction of this summer’s fires may last far beyond this season, jeopardizing their means of survival and portending yet more disasters ahead as the climate continues to warm. In Kyuerelyakh, Kirillovich and Nikolaevna lost their croplands to the fires despite their best efforts to hold back the flames, leaving them with only a few bales of hay to feed their 26 cattle through the coming winter.

“I have no idea how to live,” says Nikolaevna. “What is waiting for us next year, no one knows.”

Smoke from a forest fire 3 kilometers away, seen from a playground in the village of Dikimdya. Alexey Vasilyev