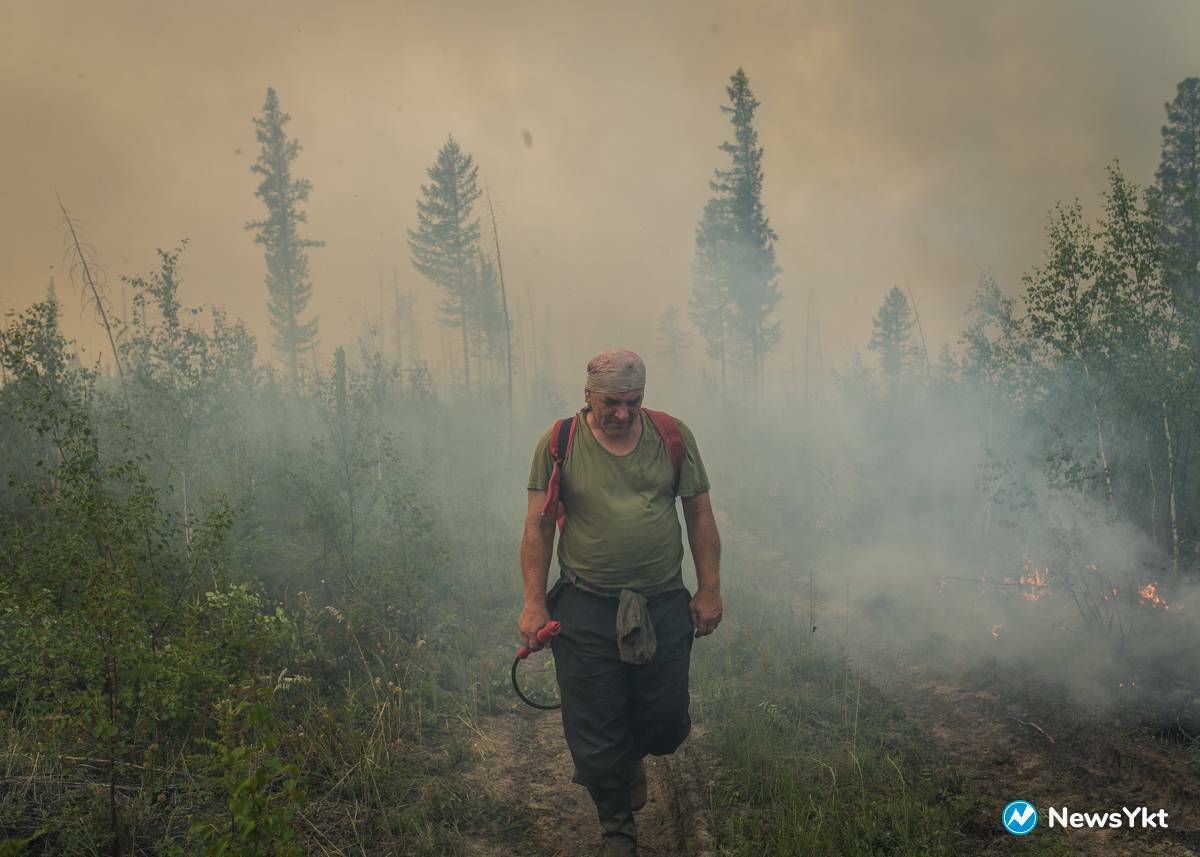 "The fires are huge, immense, disbanded." Report from the Yakutian village of Kuerelyakh

Editorial Office News.Ykt.Ru continues the series of reports "Yakutia is on fire". This time, photographer Alexey Vasiliev and journalist Elena Alekseeva visited the village of Kuerelyakh of the Gorny district, where the fire raged at a distance of less than one kilometer.

150 people are involved in extinguishing fires: the Ministry of Emergency Situations, Aviation Security, and the local people. Four large forest fires appeared around the village. Riding fire spreads rapidly through the pine forest. There was a wind with the speed of 18-20 m/s, and the temperature outside was plus 26.


It all started on June 23 because of dry thunderstorms. "The first fire appeared 20 kilometers from the village. That territory is difficult to reach. 12 people immediately went there in two cars," says the head of the village Alexey Petrov. While we were waiting for the tractor, the wind spread the fire to the treetops and the fire spread for several kilometers.


When the fire came close to the village, a group of the Ministry of Emergency Situations consisting of 30 people arrived from Yakutsk on two fire trucks and one KAMAZ truck. Meanwhile, in the Whatsapp groups of the district, villagers were discussing that people who arrived were doing nothing. "We arrived here on June 26. At the time of our arrival, there was almost no visibility at all. We fought the fire from the south side. We stopped the fire for a while, but it was going away from us. We worked almost 24 hours a day. Weather conditions interfered with extinguishing - it was incredibly hot, temperature was plus 30, wind with gusts with the speed of 18-20 m/s and there wasn’t enough equipment. Our task was to prevent the fire from reaching the settlement," says Dmitry Muravyov, senior of an airmobile group of the Ministry of Emergency Situations of the Russian Federation. He noted that this has been the largest forest fire in his memory.


The guys from the Tomsk Aviation Forest Protection Base arrived in Kuerelyakh on July 1. The senior instructor of the parachute landing group believes that the problem of fires in Yakutia is that the districts are left to themselves, there is no unified fire control and extinguishing system for the whole republic.

"In Yakutia, fires are huge, immense and disbanded. The shortage of aviation equipment affects the situation, there has to be more patrolling. The number of employees of the parachute fire services at all air bases in Russia has decreased. There was a unified federal aviation security service, and now everyone has been sent to the regions of the Russian Federation. And it turns out that each region solves its own problems by itself, there is no general control, there is no financing. We need a unified system, which would include warnings, patrollings, working with the population, maneuvering, assistance, etc.," says Denis Markov, senior instructor of the parachute group of the Tomsk Aviation Security Base.


In the Soviet years Alexander Gabyshev worked as the director of the Forestry of the Gorny district for more than 20 years. Previously, an An-2 aircraft and a Mi-8 helicopter, 12 parachutists and 15-20 forest fire workers were based in the area in the aviation department. The aircraft conducted daily patrols, fires were detected immediately and were extinguished in small areas. He believes that only if in spring and autumn agricultural branches are permitted, and there is an increase in the number of employees of the Aviation Security Service, this will help fight the fire.

"In my practice, there have never been large forest fires from agricultural branches. Now people do not want to burn last year's grass, they are afraid of large fines, so there is a lot of old dry wood, which contributes to the occurrence of forest fires and an increase in their areas," says Gabyshev.


Local resident Alexander Zhirkov is sure that another main problem is the acute lack of equipment: "I would rather sit and watch the Manchaary Games (sports competitions of Republic of Yakutia) now, and not this all. Eh, such an event was missed. I was supposed to be a judge at a jumping competition."

The largest fire in these areas was in 2002. The forest has just recovered. In the village, they say the fire is following the same path as 19 years ago.

Old man and woman Olenovs do not remember that the fire has ever come so close to the village. The last two years have been the hardest in their 45-year life together. From the very first day Kirill Kirillovich participates as a volunteer in extinguishing the fire. Tatiana Nikolaevna helps in any way she can: with food supplies, drinking water from the glacier.

They lost two huts on their farmland in the fire. They were supposed to go out for haymaking on July 13, and now they don't know how to feed their 26 cattle in winter. A year ago, they got sick with coronavirus, and they were recovering for a long time.


"It's very scary and disturbing. You can feel how much this coronavirus has hit the lungs, also this smoke around, it's impossible to breathe. Our hayfields burned down, the fields were dug up by tractors. Kirill Kirillovich managed to save several rolls of hay during the fire. I plunged everything into the water stream, only a little bit was saved. Who knows, as it's impossible to get there. I have no idea how to continue living. What awaits us next year is unknown. Fortunately, we are thrifty people," says Tatiana Nikolaevna.


The entire male population of a small village, where 600 people live, went out to extinguish the fires. Only women and children stayed in Kuerelyakh. The kids who turned 14 are also involved — they work as volunteers. They carry food and necessary things on motorcycles.


The rain extinguished the riding fire, but the grassroots fire is still spreading. The fire is no longer going to the village, but away from the village.

In total, there are 308 fires in Yakutia, 50 of them in Gorny district. The local population is already going out to haymaking, the problem of lack of people remains acute, volunteers are needed.

Alexander Yakovlev, together with his son Markel, came to defend his native village

Rescuers can work from morning to evening without rest

Andrey Shepelev came to the fire on alarm right after his wedding, which he celebrated on July 3, and on the 4th he was already extinguishing the riding fires

A riding fire can only be extinguished by an oncoming fire

Artyom Chervinsky - fireman of the city of Yakutsk

At lunch, another group discusses the plan of action for the current day

The widow Varvara Krasnoyarova cooks pancakes every morning, feeds the ground and asks the spirits for send rain